An Introduction to Dravyguna, Pharmacology in Ayurveda

Ayurveda is largely considered the oldest continuously practised system of medicine, and over the millennia has had a profound influence on the development of medicine in other cultures, including Graeco-Roman (Unani) and Chinese medicine. The ubiquity of its influence is attributable to the universality of its core principles, which are resonant in both classical and folkloric healing traditions all over the world. Among Ayurveda’s profound contributions to the practice of traditional medicine is the topic of dravyaguna, or pharmacology. Also understood as herbal energetics, dravyaguna is a comprehensive and lucid model to understand the cause and effect for the therapeutic activity of medicinal herbs. In this lecture, Todd will introduce the Ayurveda model of dravyguna, including its component parts of rasa (taste), vipaka (post-digestive taste), guna (quality), virya (energy), and prabhava (special action), with a brief review of pharmaceutical principles (bhaiṣajya kalpanā), formulation (saṃyoga auṣadha), and dosing strategies (bhaiṣajya kāla). 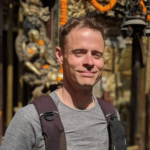